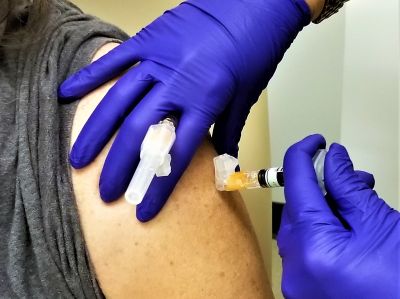 Research from Saint Louis University finds that adult patients who have received a Tdap vaccination have a 42% lower risk for dementia, compared with patients who are not vaccinated.

The study, “Lower Risk for Dementia Following Adult Tetanus, Diphtheria and Pertussis (Tdap) Vaccination,” led by Jeffrey Scherrer, PhD, professor in family and community medicine at SLU, publishes May 17 in the Journals of Gerontology, Series A: Biological Sciences and Medical Sciences.

“The magnitude of the effect of Tdap vaccination on delaying dementia is very exciting from the geriatrician’s viewpoint,” said co-author John Morley, MD, professor of geriatrics at Saint Louis University. “These effects on dementia are more pronounced than any treatments we have available for Alzheimer’s disease.”

Infections have been found to contribute to worsening cognitive impairment and incident dementia.

Several vaccine types, including influenza and herpes zoster vaccination, have been linked to a lower risk for dementia but existing evidence is limited by self-reported vaccination history and inadequate control for healthy adherer bias. Specifically, patients who get vaccinations are more likely to obtain other preventive care and take action to prevent chronic disease, including dementia.

“These results are very impressive in suggesting that routine vaccinations can significantly reduce the risks of dementia,” said co-author Daniel Hoft, MD, PhD, professor of internal medicine and director of the division of infectious diseases, allergy and immunology at SLU. “At this point, the mechanism for this protection is unclear, but could be related to either nonspecific effects that limit brain inflammation or specific immune effects.”

In the study, the authors controlled for the number of ‘well’ visits, and other confounders, to establish whether Tdap vaccination is associated with lower risk for dementia.

Researchers tested their hypothesis first in Veterans Health Affairs (VHA) cohort and then replicated it in an IBM MarketScan medical claims cohort.

The study looked at whether VHA individuals with an objective history of Tdap vaccination had lower dementia incidence in patients aged 65 and older, controlling for significant confounders. The researchers then determined whether the association differed by age groups (65-69, 70-74 and more than 75 years of age). The analysis was then replicated in the private sector claims database.

The representative cohort study used deidentified VHA medical record data from 2008-2019. The MarketScan cohort was comprised of de-identified patient data from 2009-2018. The cohorts included patients who had at least three well-visits during the observation period.

Eligible patients were 50 years of age or older on their first well visit and had follow-up visits within index dates. For the two years leading up to the index, patients were free of dementia diagnoses, any dementia treatment medications and conditions which lead to cognitive impairment.

After applying eligibility criteria, there were 122,946 eligible VHA patients and 174,053 eligible MarketScan patients.

Multiple types of vaccinations are linked to decreased dementia risk, suggesting that these associations are due in part to non-specific effects on inflammation in the body, rather than vaccine-induced pathogen-specific protective effects.

“Appropriate vaccination may be a cost-effective way to either prevent dementia or slow progression of cognitive decline,” Scherrer said.

Prospective studies and clinical trials are needed, Scherrer says, to confirm the conclusion.