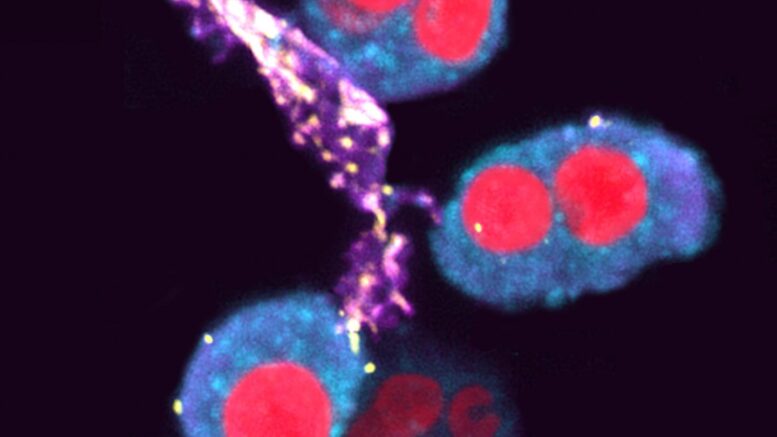 Neutrophil Extracellular Traps (NETs) are released by a type of white blood cell (neutrophils) when infected with mycobacterium tuberculosis, the bacterium responsible for causing tuberculosis. Courtesy of Walter and Eliza Hall Institute (WEHI)

Boosting the body's own disease-fighting immune pathway could provide answers in the desperate search for new treatments for tuberculosis, which still represents an enormous global disease burden and is one of the top 10 causes of death worldwide.

Led by Walter and Eliza Hall Institute (WEHI)'s Dr. Michael Stutz and professor Marc Pellegrini and published in Immunity, the study uncovered how cells infected with tuberculosis bacteria can die, and that using new medicines to enhance particular forms of cell death decreased the severity of the disease in a preclinical model.

Tuberculosis is caused by bacteria that infect the lungs, spreading from person to person through the air. A challenge in the fight against tuberculosis is that the bacteria that cause the disease have developed resistance to most antibiotic treatments, leading to a need for new treatment approaches.

Tuberculosis bacteria grow within immune cells in the lungs. One of the ways that cells protect against these 'intracellular' pathogens is to undergo a form of cell death called apoptosis -- destroying the cell as well as the microbes within it.

Stutz said researchers then tested new drugs that force cells to die. This revealed that a drug-like compound that inhibits cell death-regulatory proteins called IAPs could promote death of the infected cells. "When we treated our infection models with this compound, we were able to significantly reduce the amount of tuberculosis disease. The longer the treatment was used, the greater the reduction of disease."

"Excitingly, many of these compounds are already in clinical trials for other types of diseases and have proven to be safe and well-tolerated by patients," Stutz said. "We predict that if these compounds were progressed for treating tuberculosis, they would be most effective if used alongside existing antibiotic treatments."

Pellegrini said until now, antibiotics were the only treatment for tuberculosis, which were limited in their application due to increasing antibiotic resistance. "Unlike antibiotics, which directly kill bacteria, IAP inhibitors kill the cells that the tuberculosis bacteria need to survive," he said. "The beauty of using a host-directed therapy is that it doesn't directly target the microbe, it targets a host process. By targeting the host rather than the microbe, the chances of resistance developing are incredibly low."

The team hope the research will lead to better treatments for tuberculosis.

"This research increases our understanding of the types of immune responses that are beneficial to us, and this is an important step towards new treatments for tuberculosis, very few of which have been developed in the last 40 years," Stutz said. "We have demonstrated that host-directed therapies are viable for infections such as tuberculosis, which is particularly important in the era of extensive antibiotic resistance."