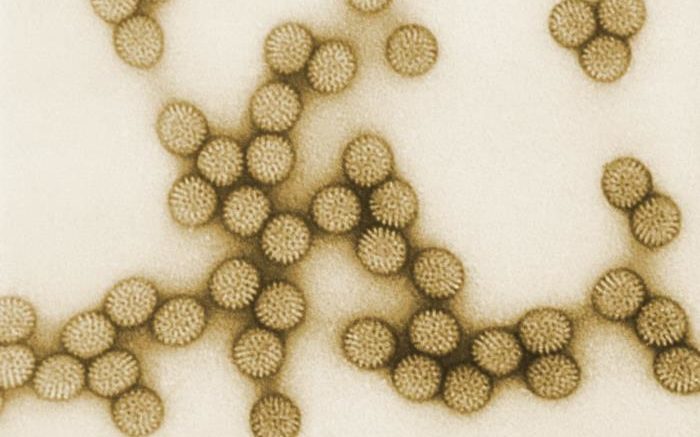 This transmission electron microscopic (TEM) image reveals some of the ultrastructural details exhibited by a number of single shelled rotavirus viral particles. These virions cause gastroenteritis in both mammals, and avian species. Courtesy of CDC/Dr. Erskine Palmer

Rotavirus infection may play a role in the development of type 1 diabetes, according to a front matter article published October 10 in the open-access journal PLOS Pathogens by Leonard C. Harrison of the University of Melbourne in Australia, and colleagues.

Rotavirus remains the major cause of infantile gastroenteritis worldwide, although the advent of vaccination has substantially decreased associated mortality. Following the recent introduction of rotavirus vaccination, there has been a 15% decrease in the incidence of type 1 diabetes in Australian children under four years of age, suggesting that rotavirus vaccination could contribute to the primary prevention of this autoimmune disease. This finding complements human and animal studies implicating rotavirus in the development of type 1 diabetes in genetically susceptible children.

In the article, Harrison and colleagues begin by reviewing molecular evidence supporting their hypothesis and point out the association between rotavirus infection and serum islet autoantibodies. They also discuss results indicating that rotavirus infection induces pancreatic pathology, as well as environmental factors that promote the rise in incidence of type 1 diabetes. Finally, they review population-level data suggesting that rotavirus vaccination may be associated with a decrease in the incidence of type 1 diabetes. According to the authors, it will be important to identify which children are most likely to be protected by rotavirus vaccination. Moreover, future studies should aim to reveal disease mechanisms and directly demonstrate whether rotavirus infects the human pancreas prior to the onset of islet autoimmunity or type 1 diabetes.

Harrison concludes, "Vaccination against rotavirus may have the additional benefit in some children of being a primary prevention for type 1 diabetes."