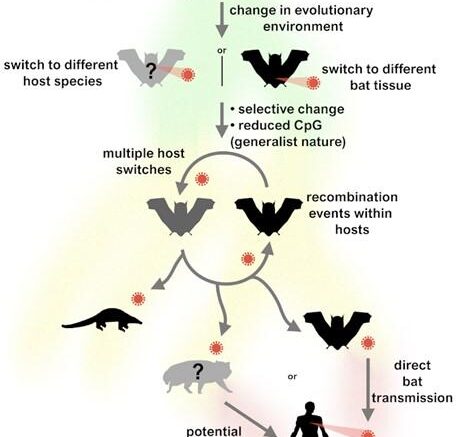 Schematic of a proposed evolutionary history of the nCoV clade and putative events leading to the emergence of SARS-CoV-2. Courtesy of MacLean OA, et al. (2021)

How much did SARS-CoV-2 need to change in order to adapt to its new human host? In a research article published in the open access journal PLOS Biology Oscar MacLean, Spyros Lytras at the University of Glasgow, and colleagues, show that since December 2019 and for the first 11 months of the SARS-CoV-2 pandemic there has been very little 'important' genetic change observed in the hundreds of thousands of sequenced virus genomes.

The study is a collaboration between researchers in the UK, US and Belgium. The lead authors David L Robertson (at the MRC-University of Glasgow Centre for Virus Research, Scotland) and Sergei Pond (at the Institute for Genomics and Evolutionary Medicine, Temple University, Philadelphia) were able to turn their experience of analyzing data from HIV and other viruses to SARS-CoV-2. Pond's state-of-the-art analytical framework, HyPhy, was instrumental in teasing out the signatures of evolution embedded in the virus genomes and rests on decades of theoretical knowledge on molecular evolutionary processes.

First author Oscar MacLean explains, "This does not mean no changes have occurred, mutations of no evolutionary significance accumulate and 'surf' along the millions of transmission events, like they do in all viruses."

Some changes can have an effect; for example, the Spike replacement D614G which has been found to enhance transmissibility and certain other tweaks of virus biology scattered over its genome. On the whole, though, 'neutral' evolutionary processes have dominated.

MacLean adds, "This stasis can be attributed to the highly susceptible nature of the human population to this new pathogen, with limited pressure from population immunity, and lack of containment, leading to exponential growth making almost every virus a winner."

Pond comments, "what's been so surprising is just how transmissible SARS-CoV-2 has been from the outset. Usually viruses that jump to a new host species take some time to acquire adaptations to be as capable as SARS-CoV-2 at spreading, and most never make it past that stage, resulting in dead-end spillovers or localized outbreaks."

Studying the mutational processes of SARS-CoV-2 and related sarbecoviruses (the group of viruses SARS-CoV-2 belongs to from bats and pangolins), the authors find evidence of fairly significant change, but all before the emergence of SARS-CoV-2 in humans. This means that the 'generalist' nature of many coronaviruses and their apparent facility to jump between hosts, imbued SARS-CoV-2 with ready-made ability to infect humans and other mammals, but those properties most have probably evolved in bats prior to spillover to humans.

Joint first author and PhD student Spyros Lytras adds, "Interestingly, one of the closer bat viruses, RmYN02, has an intriguing genome structure made up of both SARS-CoV-2-like and bat-virus-like segments. Its genetic material carries both distinct composition signatures (associated with the action of host anti-viral immunity), supporting this change of evolutionary pace occurred in bats without the need for an intermediate animal species."

Robertson comments, "the reason for the 'shifting of gears' of SARS-CoV-2 in terms of its increased rate of evolution at the end of 2020, associated with more heavily mutated lineages, is because the immunological profile of the human population has changed." The virus towards the end of 2020 was increasingly coming into contact with existing host immunity as numbers of previously infected people are now high. This will select for variants that can dodge some of the host response. Coupled with the evasion of immunity in longer-term infections in chronic cases (e.g., in immunocompromised patients), these new selective pressures are increasing the number of important virus mutants.

It's important to appreciate SARS-CoV-2 still remains an acute virus, cleared by the immune response in the vast majority of infections. However, it's now moving away faster from the January 2020 variant used in all of the current vaccines to raise protective immunity. The current vaccines will continue to work against most of the circulating variants but the more time that passes, and the bigger the differential between vaccinated and not-vaccinated numbers of people, the more opportunity there will be for vaccine escape. Robertson adds, "The first race was to develop a vaccine. The race now is to get the global population vaccinated as quickly as possible."