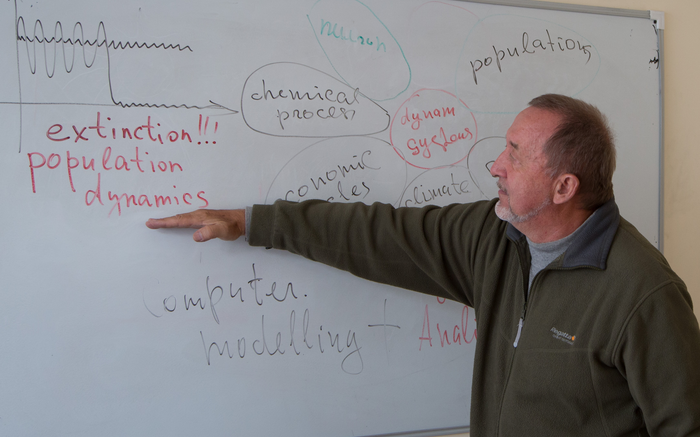 Scientists led by Lev Ryashko have been modeling bioprocesses for more than five years. Courtesy of UrFU/Ilya Safarov

Scientists at the Ural Federal University (UFU) have built a mathematical model describing the process of development and spread of epidemics. This model is versatile and would be suitable for studying any mass disease, including coronavirus infection or the new monkeypox. The model includes such basic factors as, for example, the rate of recovery or infection. If all parameters are taken into account, scientists say, it is possible to draw up scenarios of the spread of the epidemic and identify possible ways to influence the disease in order to prevent or suppress it. A description of the model is published in The European Physical Journal Special Topics.

"The point of our study is to show the variability, the complexity of the consequences of fluctuations depending on the ratio of parameters. For example, we found that limiting the number of contacts, that is, quarantine, is indeed effective in reducing the incidence of disease and suppressing the virus. Moreover, according to the mathematical calculation, in a proportional ratio it gives a better result in the fight against the spread of infection than the use of drugs that reduce mortality or increase the intensity of recovery," says Lev Ryashko, professor of the Department of Theoretical and Mathematical Physics at Ural Federal University, head of the study.

Thus, the model takes into account the rate of infection, which depends on the intensity of contact of healthy people with infected people, mortality caused by the disease, the rate of recovery, etc. Scientists pay attention to the fact that all factors are random and any even small quantitative change has a significant impact on the outcome of the spread of the epidemic.

"We built a mathematical model of the dynamic interaction between healthy and infected elements of the overall population system. For example, the number of human contacts is random: today you meet 10 people, and tomorrow you meet 20. And any such fluctuation can have a significant impact on changing the scenario of disease spread. In some situations, these changes may lead to complete recovery of the infected part of the population, while in others, on the contrary, to its extinction," explains Ryashko.