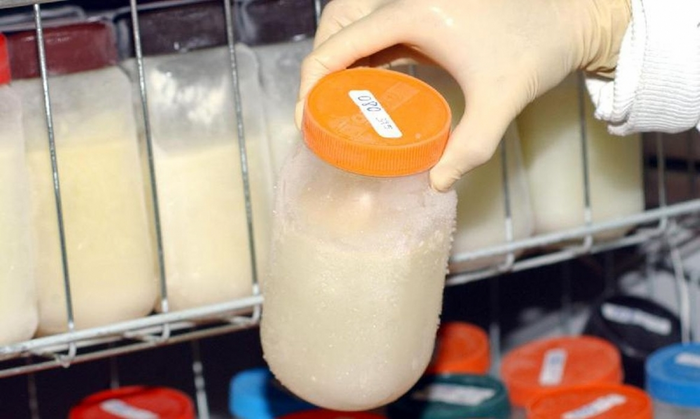 The virus was eliminated after week-long ingestion of breast milk donated by a woman who had been vaccinated against SARS-CoV-2. Courtesy of Elza Fiúza/Agência Brasil

Researchers at the University of Campinas (UNICAMP) in São Paulo, Brazil, have resorted to a thoroughly unconventional method to treat COVID-19 in a patient with a rare genetic disease that makes her immune system unable to combat viruses and other pathogens. She was instructed to take 30 milliliters of breast milk every three hours for a week. The breast milk was donated by a woman who had been vaccinated against SARS-CoV-2. After testing positive for 120 days by RT-PCR, the patient then tested negative.

The case is reported in an article published in the journal Viruses.

“I’ve followed this patient since she was a child, and I was very concerned when she told me she had COVID-19. The innate immunity error from which she suffers dysregulates her entire defense system. Her inflammatory response is defective, with few cells going to the site of the inflammation and low antibody production. Depending on their virulence, infectious agents can lead to two outcomes in such cases – chronic infection or death,” said pediatrician Maria Marluce dos Santos Vilela, a professor at UNICAMP’s Medical School and last author of the article.

Vilela explained that the immune system in humans and other mammals normally produces five types of immunoglobulin antibody (IgM, IgG, IgA, IgE and IgD). Patients with immune dysregulation syndromes have a deficiency of IgE and in some cases a complete absence of IgA, the main antibody that neutralizes viruses and other pathogens. IgA is usually present in breast milk, as well as respiratory and gastrointestinal secretions. The syndromes also entail very low production of IgG, normally the most abundant antibody in blood and responsible for recognizing and neutralizing antigens with which the organism has had contact before. Only 157 cases of the same kind as this patient’s have been described worldwide, as reported in an article published in the Journal of Allergy and Clinical Immunology, with Vilela among its authors.

“Our strategy was to keep the patient isolated at home, where she was cared for by her mother, who monitored oxygen saturation, body temperature and nutrition. In hospital, she could have caught a bacterial infection, which would have made her condition much worse. Since she was diagnosed with COVID-19, in March 2021, we’ve been keeping track of her progress by videoconference,” Vilela said.

In the first 15 days of the infection, the patient had fever, loss of appetite, coughing and asthenia (lack of energy, weakness), but to Vilela’s surprise and relief, her lungs and other systems remained unaffected. After two months, her condition was the same, and the researchers decided to try treatment with convalescent plasma in collaboration with UNICAMP’s blood center. This entails a transfusion of IgG and other antibodies produced by people who have recovered from COVID-19.

The procedure was performed, and the symptoms improved, with a reduction in blood inflammatory markers. After 15 days, however, the RT-PCR test remained positive, and the patient still had mild symptoms, as well as signs of adynamia, general muscle weakness associated with prolonged infectious processes.

“We were worried that the infection would persist for a long time, making the patient even weaker and increasing the risk that she would infect other people. At the same time, an article came out showing that breastfeeding women immunized with Pfizer’s COVID-19 vaccine produced milk with a reasonable amount of IgA. We decided on an experimental treatment using breast milk to boost her IgA levels,” Vilela said.

The procedure was possible only because the safety and quality of Brazil’s breast milk banks are assured by strict legislation. Donors must prove they are healthy and supply negative test results for infectious diseases such as AIDS, syphilis and hepatitis, among others. In addition, the system keeps records of vaccinations.

“We asked her to take the milk orally and keep it in her mouth for several minutes. IgA works like a broom in the sense that it sticks to pathogens throughout the gastrointestinal tract so that whatever is improper is eliminated in the feces. We decided on a three-hour interval between doses, except at night, in order not to give the virus a chance to replicate,” Vilela said.

The patient tested negative after a week, and twice again at ten-day intervals. “We continue to do RT-PCR tests for SARS-CoV-2. We’re concerned that she will acquire an asymptomatic infection, given the spread of novel variants,” Vilela said.

According to the article, the virus remained active in the patient’s organism for at least 124 days. The UNICAMP researchers made sure it was the same infection and not a series of reinfections by sequencing the genomes of viruses isolated from three samples collected on different dates for diagnostic purposes. They also counted the number of viral particles in two of the samples. This part of the investigation was led by professor José Luiz Proença-Módena, who heads the university’s Laboratory Emerging Virus Studies (LEVE).

“The results of the sequencing showed that the patient was infected by the gamma variant [P.1] of SARS-CoV-2, which was first detected in Manaus in late 2020 and caused a collapse in the city’s health service in early 2021,” Módena said. “The data also showed that the patient was chronically infected by the same virus, and not successively infected by different viruses, since no mutations in the viral genome were found in the three sequencing reactions performed on samples from the patient collected at different times.”

For Vilela, the trial was only possible thanks to resources provided by the SUS (Sistema Único de Saúde), Brazil’s national health system. “The SUS network enabled us to retrieve samples for genomic analysis,” she said. “It also assured the safety of both the convalescent plasma and breast milk used in the treatment. Because its quality control is the same all over Brazil, I was able to tell a colleague in Acre [a state in the far north of Brazil] how to treat a patient with a similar immunodeficiency.”