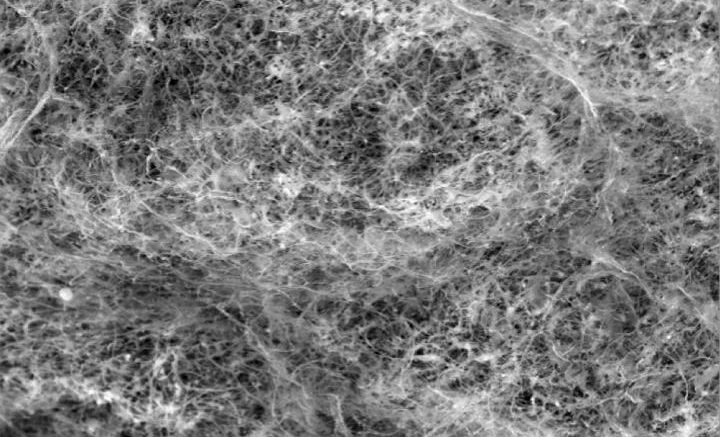 This is a scanning electron microscope (SEM) image of the polymer network that makes up mucins. Courtesy of Katharina Ribbeck

More than 200 square meters of our bodies -- including the digestive tract, lungs, and urinary tract -- are lined with mucus. In recent years, scientists have found some evidence that mucus is not just a physical barrier that traps bacteria and viruses, but it can also disarm pathogens and prevent them from causing infections.

A new study from MIT reveals that glycans -- branched sugar molecules found in mucus -- are responsible for most of this microbe-taming. There are hundreds of different glycans in mucus, and the MIT team discovered that these molecules can prevent bacteria from communicating with each other and forming infectious biofilms, effectively rendering them harmless.

"What we have in mucus is a therapeutic gold mine," says Katharina Ribbeck, the Mark Hyman, Jr. Career Development Professor of Biological Engineering at MIT. "These glycans have biological functions that are very broad and sophisticated. They have the ability to regulate how microbes behave and really tune their identity."

In this study, which appears today in Nature Microbiology, the researchers focused on glycans' interactions with Pseudomonas aeruginosa, an opportunistic pathogen that can cause infections in cystic fibrosis patients and people with compromised immune systems. Work now underway in Ribbeck's lab has shown that glycans can regulate the behavior of other microbes as well.

The average person produces several liters of mucus every day, and until recently this mucus was thought to function primarily as a lubricant and a physical barrier. However, Ribbeck and others have shown that mucus can actually interfere with bacterial behavior, preventing microbes from attaching to surfaces and communicating with one another.

In the new study, Ribbeck wanted to test whether glycans were involved in mucus' ability to control the behavior of microbes. These sugar molecules, a type of oligosaccharide, attach to proteins called mucins, the gel-forming building blocks of mucus, to form a bottlebrush-like structure. Mucus-associated glycans have been little studied, but Ribbeck thought they might play a major role in the microbe-disarming activity she had previously seen from mucus.

To explore that possibility, she isolated glycans and exposed them to Pseudomonas aeruginosa. Upon exposure to mucin glycans, the bacteria underwent broad shifts in behavior that rendered them less harmful to the host. For example, they no longer produced toxins, attached to or killed host cells, or expressed genes essential for bacterial communication.

This microbe-disarming activity had powerful consequences on the ability of this bacterium to establish infections. Ribbeck has shown that treatment of Pseudomonas-infected burn wounds with mucins and mucin glycans reduces bacterial proliferation, indicating the therapeutic potential of these virulence-neutralizing agents.

"We've seen that intact mucins have regulatory effects and can cause behavioral switches in a whole range of pathogens, but now we can pinpoint the molecular mechanism and the entities that are responsible for this, which are the glycans," Ribbeck says.

In these experiments, the researchers used collections of hundreds of glycans, but they now plan to study the effects of individual glycans, which may interact specifically with different pathways or different microbes.

Pseudomonas aeruginosa is just one of many opportunistic pathogens that healthy mucus keeps in check. Ribbeck is now studying the role of glycans in regulating other pathogens, including Streptococcus and the fungus Candida albicans, and she is also working on identifying receptors on microbe cell surfaces that interact with glycans.

Her work on Streptococcus has shown that glycans can block horizontal gene transfer, a process that microbes often use to spread genes for drug resistance.

Ribbeck and other researchers are now interested in using what they have learned about mucins and glycans to develop artificial mucus, which could offer a new way to treat diseases stemming from lost or defective mucus.

Harnessing the powers of mucus could also lead to new ways to treat antibiotic-resistant infections, because it offers a complementary strategy to traditional antibiotics, Ribbeck says.

"What we find here is that nature has evolved the ability to disarm difficult microbes, instead of killing them. This would not only help limit selective pressure for developing resistance, because they are not under pressure to find ways to survive, but it should also help create and maintain a diverse microbiome," she says.

Ribbeck suspects that glycans in mucus also play a key role in determining the composition of the microbiome -- the trillions of bacterial cells that live inside the human body. Many of these microbes are beneficial to their human hosts, and glycans may be providing them with nutrients they need, or otherwise helping them to flourish, she says. In this way, mucus-associated glycans are similar to the many oligosaccharides found in human milk, which also contains a wide array of sugars that can regulate microbe behavior.

"This is a theme that is likely at play in many systems where the goal is to shape and manipulate communities inside the body, not just in humans but throughout the animal kingdom," Ribbeck says.