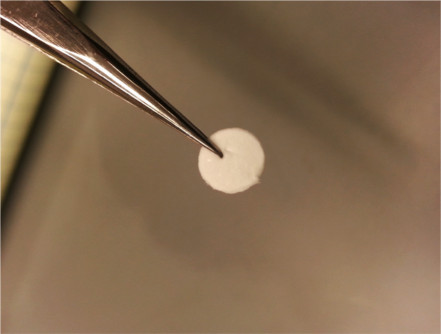 A polymer “wafer” that, when placed under the tongue, can effectively deliver and preserve protein-based vaccines for diseases. Courtesy of Polymeric Biomaterials Lab, University of Minnesota

A team of researchers, led by a University of Minnesota associate professor, have developed a polymer “wafer” that, when placed under the tongue, can effectively deliver and preserve protein-based vaccines for diseases. The research could open the door for vaccines that can be more easily produced and distributed to communities around the world. The study is published in the Journal of Controlled Release, a biweekly peer-reviewed medical journal.

The membrane under the tongue—called the sublingual site—has proven to be very effective at absorbing drugs. Several drugs are delivered this way, such as nitroglycerin tablets to treat chest pain that precedes heart attacks. But large molecules, such as the proteins and nucleic acids that make up many vaccines, have historically been too big to enter the body sublingually and have to be injected with needles. These large molecules are also very fragile and must be preserved, which can be a roadblock for vaccine distribution—for example, Pfizer’s COVID-19 vaccine, which is made up of nucleic acids and requires ultra-cold storage.

With the polymer wafers, the researchers have found a solution to both of those problems—and proven that their technology works with human immunodeficiency virus (HIV) proteins. While there is not a working vaccine for HIV yet, the researchers have demonstrated a delivery method that could work once one is developed.

“People have been struggling with creating an HIV vaccine for many years, and one of the problems is how to deliver it,” said Chun Wang, corresponding author of the study and a biomedical engineering associate professor in the University of Minnesota’s College of Science and Engineering. “So the challenge becomes, can we take a large molecule like a protein, store it at room temperature, give it through the sublingual site, avoid the pain and hassle with needles, have it be absorbed, and actually generate an immune response? And it turns out that we have demonstrated it actually can work with a rather simple but elegant material platform.”

The wafer is mainly made up of two ingredients: alginate and carboxymethyl cellulose (CMC). The alginate preserves the proteins while the CMC helps the wafer stick to the sublingual membrane long enough to deliver a high concentration of the proteins. The key to making the wafer work, Wang said, was finding the right balance of the two polymers.

With further testing, the polymer wafers could also provide avenues for other vaccines—perhaps one day, for COVID-19.

“This is just a small step in this long journey,” Wang said. “If we continue this line of work, it can bring us to a point where we will have vaccines—they could be based on DNA, RNA, proteins—that can be stored without refrigeration and easily delivered under the tongue at the sublingual site. They will be quickly disseminated throughout the world because they don’t rely on certain equipment and preservation and all of that stuff. This will be particularly good for low-resource regions of the world, even in America—rural areas that are lacking certain essential facilities and infrastructure.”

Source: University of Minnesota College of Science and Engineering