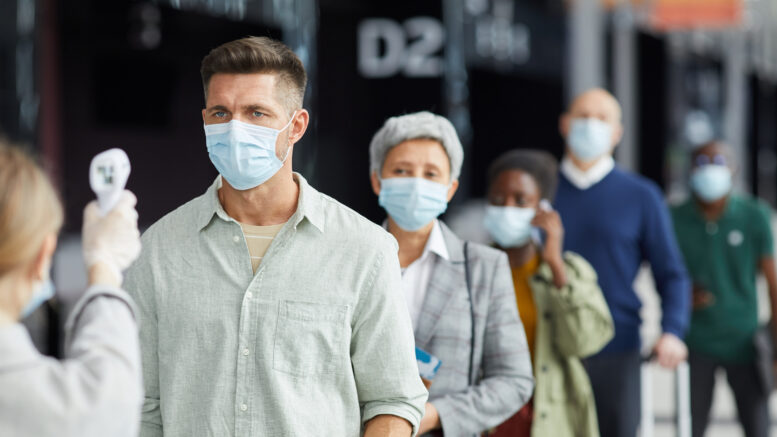 Four of 10 Americans surveyed report that they were often less than truthful about whether they had COVID-19 and/or didn’t comply with many of the disease’s preventive measures during the height of the pandemic, according to a new nationwide study led in part by University of Utah Health scientists. The most common reasons were wanting to feel normal and exercise personal freedom.

The study, which appears in the Oct. 10, 2022, issue of JAMA Network Open, raises concerns about how reluctance to accurately report health status and adherence to masking, social distancing, and other public health measures could potentially lengthen the current COVID-19 pandemic or promote the spread of other infectious diseases in the future, according to Angela Fagerlin, PhD, senior author of the study and chair of the Department of Population Health Sciences at U of U Health.

“COVID-19 safety measures can certainly be burdensome, but they work,” says Andrea Gurmankin Levy, PhD, a professor of social sciences at Middlesex Community College in Connecticut. As co-lead author of the study, she worked in collaboration with Fagerlin and other scientists at U of U Heath as well as researchers elsewhere in the United States.

“When people are dishonest about their COVID-19 status or what precautions they are taking, it can increase the spread of disease in their community.” Levy says. “For some people, particularly before we had COVID vaccines, that can mean death.”

The researchers decided to assess how truthful Americans were being about their COVID-19 disease status and/or compliance with COVID-19 preventive measures after they noticed several media stories about people who were dishonest about their vaccination status, Fagerlin says.

In the survey, conducted in December 2021, more than 1,700 people from across the country were asked to reveal whether they had ever misrepresented their COVID-19 status, vaccination status, or told others that they were following public health measures when they actually weren’t. The sample size is far larger and asked about a broader range of behaviors than previous studies on this topic, according to Fagerlin, who is also a research scientist at the Veteran Affairs Salt Lake City Healthcare System.

Based on a list of nine behaviors, 721 respondents (42%) reported that they had misrepresented COVID-19 status or failed to follow public health recommendations. Some of the most common incidents were:

All age groups younger than 60 years and those who had a greater distrust of science were more likely to engage in misrepresentation and/or misrepresentation than others. About 60% of respondents said that they had sought a doctor’s advice for COVID-19 prevention or treatment.

However, the researchers found no association between COVID-19 misrepresentation and political beliefs, political party affiliation, or religion.

“Some individuals may think if they fib about their COVID-19 status once or twice, it’s not a big deal,” Fagerlin says. “But if, as our study suggests, nearly half of us are doing it, that’s a significant problem that contributes to prolonging the pandemic.”

Among the reasons respondents gave for misrepresentation were:

Among the study’s limitations, the researchers could not determine if respondents honestly answered survey questions, opening the possibility that their findings underestimated how commonly people misrepresented their health status.

“This study goes a long way toward showing us what concerns people have about the public health measures implemented in response to the pandemic and how likely they are to be honest in the face of a global crisis,” says Alistair Thorpe, PhD, co-first author and a post-doctoral researcher in the Department of Population Health Sciences at U of U Health. “Knowing that will help us better prepare for the next wave of worldwide illness.”