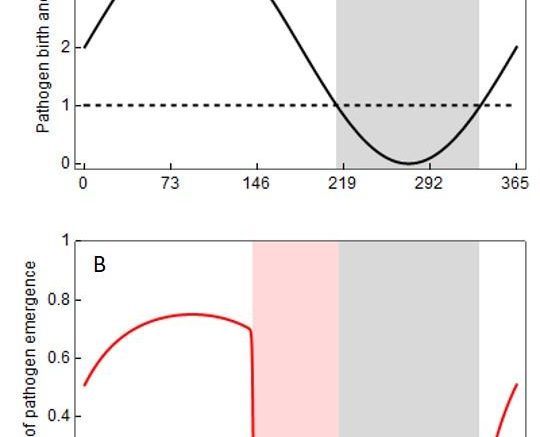 Figure A shows the variation in the birth rate (pathogen transmission rate, solid line) and death rate (recovery rate of infected hosts, dotted line) over time (the time unit is a day). The gray shading represents "winter" for the pathogen (in "winter" the birth rate is lower than the death rate). Figure B shows the probability of the emergence of the pathogen (red curve), depending on the day of the year at which it is introduced. This probability is very low in "winter" (low transmission rate), but also just before winter (red shading). This very significant decrease in the probability of emergence just before winter is the "winter is coming" effect. Courtesy of Sylvain Gandon

Seasonal fluctuations drive the dynamics of many infectious diseases. For instance, the flu spreads more readily in winter. Two scientists from the University of Nantes and the CNRS in Montpellier have developed a mathematical model to predict the risk of the emergence of an epidemic, depending on the time of the year at which the pathogen is introduced.

Their theoretical predictions, which accounts for random factors acting on the birth and death rates of the pathogen, highlight an interesting temporal dynamic when these pathogens have a "winter" period. This is not necessarily the season of the same name, but a period which is less favourable to them (when the birth rates is lower than the death rate).

According to their research, a pathogen introduced just before this "winter" has a much lower probability of escaping extinction and causing a large epidemic. The scientists have called this the "winter is coming" effect. Their theoretical model, it is thought, will make it possible to develop better strategies to act on seasonal epidemics. Intervention at the right time could amplify this effect and would thereby generate unfavourable conditions for the emergence of an epidemic.

This research is published in PLOS Computational Biology. 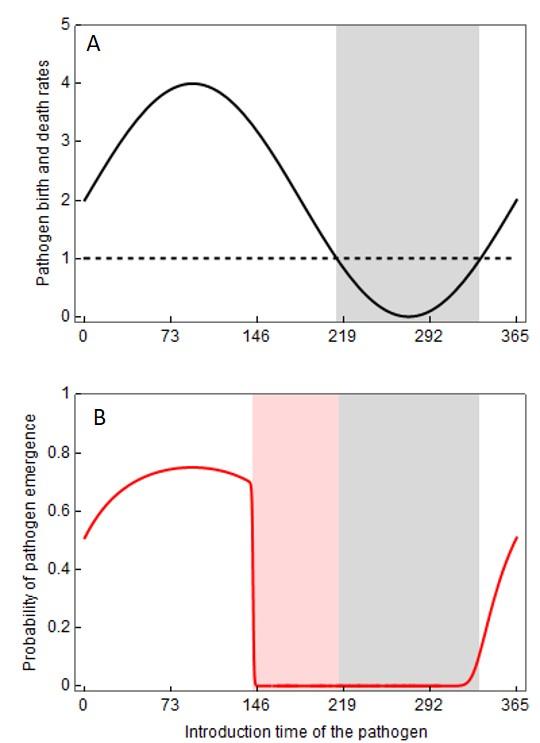 2 Comments on "The Influence of Seasonality on Pathogen Emergence"