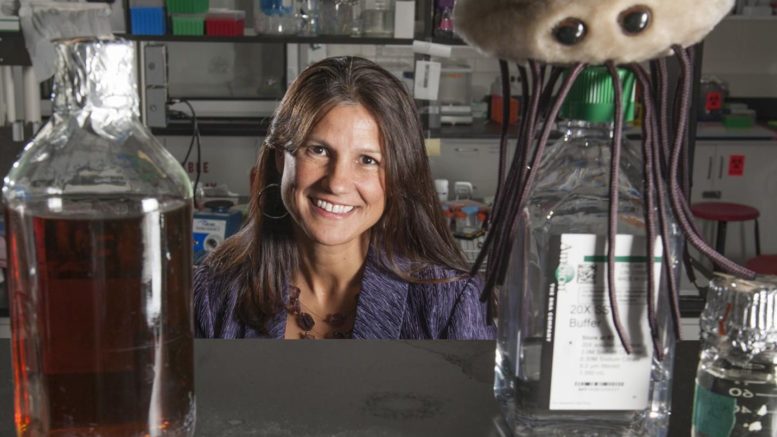 Salmonella is acting up in Michigan, and it could be a model for what's happening in other states, according to a new Michigan State University study. Courtesy of MSU

Salmonella is acting up in Michigan, and it could be a model for what's happening in other states, according to a new Michigan State University study.

The study, appearing in Frontiers in Medicine, documents a substantial uptick in antibiotic resistant strains, and consequently, longer hospital stays as doctors work to treat the increasing virulent pathogens.

"If you get a salmonella infection that is resistant to antibiotics today, you are more likely to be hospitalized longer, and it will take you longer to recover," said Shannon Manning, MSU Foundation professor in the Department of Microbiology and Molecular Genetics and senior author of the study. "We need better detection methods at the clinical level to identify resistant pathogens earlier so we can treat them with the right drugs the first time."

Losing a day or more to misdiagnosis or improper treatment allows symptoms to get worse. Doctors might kill off a subpopulation of bacteria that are susceptible, but the ones that are resistant grow stronger, she added.

Salmonella is a diverse group of bacterial pathogens that causes foodborne infections. Infected patients often develop diarrhea, nausea, vomiting and abdominal pain, though some infections are more severe and can be life threatening.

When it comes to treatments, each strain reacts differently to the range of antibiotics available for prescription by doctors. So getting it right the first time is crucial.

Specifically in Michigan, doctors are seeing more strains that are resistant to ampicillin, a common antibiotic prescribed to treat salmonella. Multidrug resistance, or resistance to more than three classes of antibiotics, has also increased in Michigan and could further complicate patient treatment plans.

"We're still uncertain as to why this is happening; it could be that these antibiotics have been overprescribed in human and veterinary medicine and that possessing genes for resistance has allowed these bacteria to grow and thrive in the presence of antibiotics," Manning said. "Each state has its own antibiotic-resistance issues. It's important that the medical profession remains vigilant to ever-changing patterns of resistance in salmonella and other foodborne pathogens, rather than look for a blanket national solution."

Historically, salmonella has affected young children and the elderly, but now there's been a rise in adult cases, suggesting that the epidemiology of the infections has changed in Michigan.

Diving into individual strains of salmonella, the team of scientists found that patients with Typhimurium were more likely to have resistant infections as were patients infected during the fall, winter or spring months.

Another distinction was revealed between the strains affecting people living in rural and urban areas. Enteritis infections tend to be higher in rural areas. This may be attributed to rural residents' exposure to farm animals or untreated sources of water.

Each state's salmonella population has its own personality; so every state's approach to identifying disease drivers and effective treatments should be modified to reflect these traits.

"Our results show the importance of surveillance, monitoring resistance frequencies and identifying risk factors specific to each state and region," Manning said. "The trends that are revealed can lead to new prevention strategies."

Additional MSU researchers contributing to the study include Sanjana Mukherjee, the lead author, Chase Anderson and Rebekah Mosci. Scientists from Wayne State, Sparrow Hospitals and the Michigan Department of Health and Human Services also contributed to this research.

Be the first to comment on "The Nature of Salmonella is Changing, and It’s Meaner"