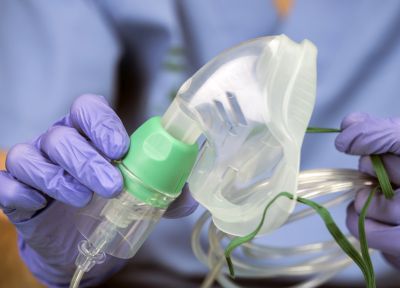 Approximately 1 in 4 patients hospitalized for the acute respiratory distress syndrome (ARDS) associated with severe COVID-19 infections may have a distinct phenotype (disease presentation) or biochemical profile associated with organ dysfunction, blood-clotting abnormalities and greater risk of death than patients with other, seemingly similar forms of the disease, researchers at Massachusetts General Hospital (MGH) have found.

Among 263 patients admitted to intensive care units (ICUs) at MGH for respiratory failure due to severe COVID-19 infection, 70 (26.6%) had increased levels of biomarkers in the bloodstream indicating disordered blood clotting, higher inflammation, and organ dysfunction compared with the other patients, report Sylvia Ranjeva MD, PhD, and Lorenzo Berra, MD, investigators in the Department of Anesthesia, Critical Care and Pain Medicine, and their colleagues in that department and Pulmonary and Critical Care Medicine and Respiratory Care at MGH.

Patients with this more severe phenotype had twice the risk of death, despite minimal differences in respiratory mechanics or in the severity of ARDS between the two phenotypes.

Their findings are published in EClinicalMedicine, an open-access journal of The Lancet group.

ARDS is a catch-all term for lung injury that can arise from many different conditions such as pneumonia, severe influenza, trauma, blood infections or inflammation of the pancreas.

The syndrome can be life-threatening and may require patients to be put on mechanical ventilation, but it has been difficult for clinicians to develop effective therapies because of the wide spectrum of causes associated with it.

Pulmonary care experts typically base treatment decisions for patients with ARDS on how their bodies and immune systems respond to disease. Prior studies have suggested that some patients have what is called a "hyperinflammatory" phenotype, because their bodies respond to disease or injury by unleashing a flood of cytokines (proteins released in response to inflammation) and other substances to fight the disease. Several studies have shown that patients with the hyperinflammatory phenotype have about a 20% greater risk for death compared with other patients.

"The motivation for our work is that if we can identify subsets of patients with different biochemical characteristics, and then those patients respond differently to treatment or have different clinical outcomes, we would be one step closer to a more mechanism-based understanding of ARDS," she says.

The researchers identified two distinct phenotypes of COVID-19-associated ARDS that had substantial differences in their responses to disease and in risk for death, despite having minimal differences in respiratory function and oxygenation levels.

Patients with the less common but more serious phenotype could be identified by increases in markers of organ dysfunction (for example, kidney function and cardiac biomarkers) and by increased evidence of blood-clotting dysfunction (coagulopathy).

Their results suggest that disruption of the normal regulation of blood vessels and circulation could be a key feature of critical illness, severe symptoms, and death related to COVID-19 infections, the researchers write.

The study is supported by the Reginald Jenney Endowment Chair at Harvard Medical School to Berra, by Lorenzo Berra Sundry Funds at MGH, and by laboratory funds of the Anesthesia Center for Critical Care Research of the Department of Anesthesia, Critical Care and Pain Medicine at MGH.