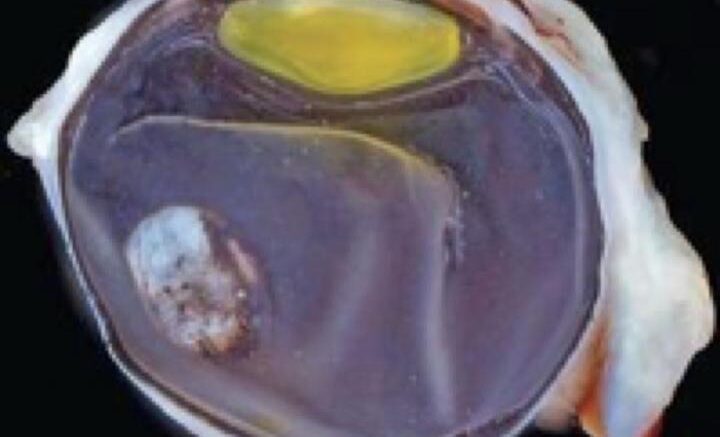 Cross-section of the eye of an infant rhesus monkey eye exposed to Zika virus in utero, showing an oval-shaped defect in the retina. Courtesy of Glenn Yiu and Koen Van Rompay, UC Davis

While the SARS-CoV-2 virus has dominated the news this past year, researchers continue to study the health effects of the Zika virus, which has been reported in 86 countries globally.

The Zika virus is primarily transmitted by the bite of an infected mosquito from the Aedes genus. However, it can also be passed through sexual contact, blood transfusions, organ transplants, and between mother and baby during pregnancy. The virus has been documented to cause a range of birth defects, including microcephaly and various neurological, musculoskeletal, and eye abnormalities.

A new study from Glenn Yiu, associate professor in the Department of Ophthalmology, and Koen Van Rompay, a core scientist at the California National Primate Research Center, found that Zika infection during the first trimester of pregnancy can impact fetal retinal development and cause congenital ocular anomalies. The virus does not appear to affect ocular growth postnatally, however.

"It has been known that congenital infection with the Zika virus can lead to eye defects, but it was unclear if the virus continues to replicate or affect eye development after birth," Yiu said. "Our study in rhesus monkeys suggest that the virus primarily affects fetal development during pregnancy, but not the growth of eye after birth."

In this collaboration between the UC Davis Eye Center and the California National Primate Research Center, two pregnant rhesus monkeys were infected with Zika virus late in the first trimester. The ocular development of the Zika-exposed infants was then studied for two years following their birth.

The Zika-exposed infant monkeys did not display microcephaly or apparent neurological or behavioral deficits. The infants did exhibit several ocular birth defects, however. The defects included large colobomas, a missing gap in the eye due to abnormal development. The Zika-exposed infant monkeys also exhibited a loss of photoreceptors -- the light-sensing cells of the retina -- and retinal ganglion neuron, which helps transmit visual information to the brain.

Despite congenital ocular malformations at birth, their eyes appeared to follow normal development during their first two years.

The findings suggest that ocular defects due to Zika infection primarily occur in utero and likely do not have a continued impact on ocular development after birth.

Rhesus macaques are natural hosts of the virus and share similar immune and ocular characteristics to humans, including blood-retinal barrier characteristics and the unique presence of a macula, making them superior animal models of the infection than typical laboratory animals like mice and rats. The findings were published in JCI Insight, an open-access peer-reviewed journal dedicated to biomedical research.

The study received support from the Office of Research Infrastructure Program, National Institutes of Health, National Eye Institute, BrightFocus Foundation and the Macula Society. Histological studies of the eyes were conducted at the Comparative Ocular Pathology Laboratory of Wisconsin.