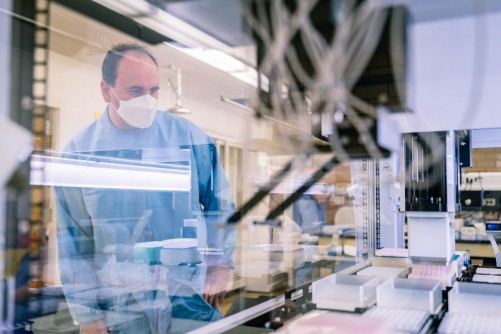 Picture viral RNA as a single component that you can break into a million pieces. Now imagine reassembling those pieces together, literally like a jigsaw puzzle. If there’s a chipped corner or if a piece won’t fit snugly as it should, consider that a virus mutation or variant.

That’s genomic sequencing, in a nutshell, when it comes to identifying variants of COVID-19, according to Peter Stoilov, associate professor of biochemistry at the West Virginia University School of Medicine.

Stoilov helps lead the laboratory efforts of a statewide partnership between WVU Medicine, Marshall University and the state Department of Health and Human Resources to identify SARS-CoV-2 variants.

Despite the ongoing COVID vaccine rollout and relaxing of public health and safety guidelines, concerns have arisen in recent weeks over the various strains – B.1.1.7 (United Kingdom), B.1.351 (South Africa), P.1 (Brazil) – that have evolved from the original virus.

Stoilov and fellow scientists were prepared. From the onset of the pandemic, a statewide collaborative scientific task force took up the needs of the health crisis, including establishing the WVU Rapid Development Laboratory. Recognizing this solid framework already intact, Dr. Clay Marsh, vice president and executive dean at WVU Health Sciences and West Virginia’s Coronavirus Czar, requested Laura Gibson, senior associate vice president of Research and Graduate Education, to form a team to sequence positive samples from across West Virginia.

“It was a little awkward because I was training a student how to perform data analysis,” he said. “I wasn’t expecting to see that.”

Stoilov discovered the variants in the data at around 6 p.m. on a Friday. He then sent the findings to Jim Denvir, associate professor of biomedical sciences at Marshall University’s Joan C. Edwards School of Medicine and collaborator on the sequencing project.

But there was a minor issue. An ice storm had pummeled Huntington, site of Marshall University, and knocked out electricity and internet at Denvir’s home. He dashed to the office to perform the analysis.

“I had developed an automated data analysis pipeline which starts from the individual genomic sequence fragments, runs through the process of assembling them into whole genome sequences, and then identifies variants and flags variants of concern,” Denvir said. “I was quickly able to run this pipeline on the data and confirm Peter's suspicions.”

In just a few hours, multiple entities stretched across West Virginia, identified and confirmed the new variant and relayed the information to the masses.

Scientists are now processing nearly 200 samples a week, with the aid of a robot, for variant sequencing.

In “batches,” positive COVID-19 samples are inserted into a machine that examines their genetic makeup. Stoilov said the ultimate goal is to scale it up to 700 samples a week.

“This has to be done entirely computationally,” he said. “One batch contains about 90 different samples. Each one comes with a million of these small pieces. The machine does all the work. Doing it by hand would take a lifetime.

“Those first batches were WVU samples but we’re working on a pipeline to get samples from the rest of the state. That’s very important because we want to have a good look at all of West Virginia, not just one corner. That can be misleading.”

The machine takes two or three days to churn out the sequencing data. Unfortunately, that’s the quickest the technology can move it, said Stoilov, who then analyzes the results, a process that can take between 15 minutes to an hour.

So what happens while the samples are sitting in the machine for up to three days?

That’s when the puzzle pieces are being matched up – or not.

RNA, which stands for ribonucleic acid, is a polymer that can be found in cytoplasm or nucleus. It contains four different bases: adenine, guanine, cytosine and uracil (A, G, C, U). If there’s a change in the sequence of those bases (A, G, C, U), you’ve got a variant, Stoilov said, and the puzzle pieces don’t fit.

“It’s a lot like dog breeds,” Stoilov explained. “A German shepherd may have a different tail, different color or different ear shape from another German shepherd. These are individual mutations that define the breed of the virus.”

When biologist Ryan Percifield first arrived at WVU in 2010, his first job was managing Stoilov’s lab in the biochemistry department. A year later, he moved over to the WVU Genomics Core Facility, which he manages.

And now a global pandemic has brought Percifield and Stoilov back together again.

The Genomics Core Facility offers next-generation sequencing, technology capable of deciphering the entire human genome within a single day and a vital key to the statewide variant detection efforts.

“Old-school sequencing was basically taking one sample and getting one sequence,” Percifield said. “Next-gen is taking a whole genome, chopping it up and getting millions of sequences from that one sample. That became the norm in the late 2000s, but we didn’t have those capabilities in the state at the time.”

Under Percifield’s leadership, the facility purchased next-generation equipment in 2014 and has been training scientists and assisting in genomic research ever since.

The facility serves as one of the first links in the chain of sequencing. Once RNA is extracted from samples, Percifield takes them and builds ‘libraries,’ meaning he turns the RNA into DNA by binding adapters to a flow cell. That allows him to sequence them.

Each sample then has its own unique index, or tag, that is entirely different from any other sample, he explained.

“That way you can pull them all together at the end and sequence it on one run,” Percifield said. “I take it from the RNA through the library-building process to the sequencing, and then I give it to either Peter (Stoilov) and/or Jim Denvir at Marshall and those two do the analysis at that point.”

Percifield has worked closely with the Bioinformatics Core facility at Marshall, under Denvir's leadership, and the Genomics Core facility there, under the leadership of another sequencing collaborator, Don Primerano, since 2011.

"Our long history of strong collaboration with researchers at WVU, including Drs. Stoilov and Gibson, and Ryan Percifield, made it a virtually seamless process to combine our expertise in order to address the need," Denvir said.

Much like the virus itself, the statewide partnership and its work continually evolves – as this may be a project that sticks around for quite a while.

In addition to the original main three variants (U.K., South Africa, Brazil), other dominant mutations have emerged including strains from California and New York. The Centers for Disease Control and Prevention has even classified new variants into three separate categories, ranked from least to most severe: variants of interest, concern and high consequence.

There are currently no SARS-CoV-2 variants that rise to the level of high consequence, though the UK, Brazil, South Africa and two California strains identified fall into the ‘variant of concern’ category.

Because of the unpredictable nature of the virus mutating, it remains ever important to continue to get tested and to properly wash hands, mask up and social distance, according to health experts.

Gibson said the team is prepared to adapt to any unforeseen trends.

“The rapid progress reflects the willingness of several individuals to put their typical work aside to focus on an important need for the state,” Gibson said. “This is exactly how basic science has its most impactful outcome - through partnership and application to developing real solutions.”

The researchers aren’t alone in their battle. The Virginia-based Foster Family Foundation provided $75,000 to support the collaborative efforts to identify variants of SARS-CoV-2. The funds – provided in conjunction with WVU’s fourth Day of Giving – are helping the research team leverage existing expertise, advance technical efforts and boost efficiency to sustain the project moving forward.

These efforts will also allow West Virginia to continue to shine in the public eye in the wake of the COVID-19 response.

“West Virginia doesn't always get the best rap around the world and around the United States,” Percifield said. “But not rightfully so. Look at the response that our state has had, especially with the vaccine rollout. We’ve been amazing.

“And I think that the genome sequencing endeavor we're undertaking right now – we’re way ahead of many other states.”