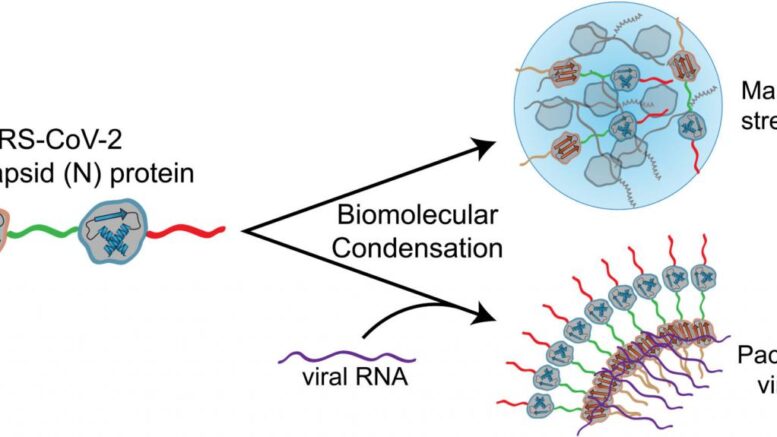 An illustration of how the nucleocapsid protein in the SARS-CoV-2 virus facilitates packaging of viral RNA into new virus particles that infect neighboring cells. Courtesy of Colorado State University

Eric Ross and Sean Cascarina, biochemistry and molecular biology researchers at Colorado State University, have released a research paper identifying a protein encoded by SARS-CoV-2, the virus that causes COVID-19, that may be associated with the quick spread of the virus through cells in the human body.

Through powerful application of the foundational sciences and bioinformatic analysis their research highlights key characteristics of the virus that could one day be important in the development of a treatment for COVID-19.

Before COVID-19, Ross and Cascarina had been studying prions - misfolded proteins that can transmit their abnormal shape onto normal variants of the same protein. Prions cause several fatal and transmissible neurodegenerative diseases, including Mad Cow Disease in cattle and Creutzfeldt-Jakob disease in humans. Cascarina's sub-focus has been on low-complexity domains - regions in a protein's sequence that differ from typical regions in their amino acid composition and chemical behavior.

What makes these low-complexity protein domains interesting is their tendency toward liquid-liquid phase separation, similar to oil separating from water. Some of these proteins form "biomolecular condensates" in a cell, which are small areas in a cell where the protein is highly-concentrated, analogous to the oil droplets that form when oil separates from water.

When Ross and Cascarina pivoted to study COVID-19 earlier this year, they found that the nucleocapsid, or N, protein in the SARS-CoV-2 virus has a low-complexity domain that may utilize liquid-liquid phase separation to facilitate the packaging of viral RNA into new virus particles that can infect neighboring cells.

The N protein may also be associated with reducing an infected cell's anti-viral stress response. Cells often form something called stress granules, a type of biomolecular condensate, to respond to a change in their environment, and these granules may have an anti-viral effect.

"The cell can react to a stress event by making changes in the cellular environment," said Ross, "including making these modifications to some proteins."

"But viruses obviously want to avoid a cell's defenses," Cascarina added. "They want to be infectious, so sometimes they are able to regulate these stress granules." By hijacking the normal stress response, the virus may be able to reduce the cell's anti-viral response capabilities.

Since the acceptance of their paper on May 31, four other labs across the country have confirmed parts of Cascarina's hypothesis about the N protein.

The application of this research could be for the development of treatments once a person has already contracted the virus, rather than preventing infection like a vaccine. Both of these areas of research are essential to slowing and ending the COVID-19 pandemic.

"Medically, if you could counteract the virus' ability to interfere with a cell's immune response, then you could help the cells to fight off the virus," said Ross. "I think this falls into the category of very basic science: if we understand the viral process, then conceivably we can try to design a drug that reverses that process."