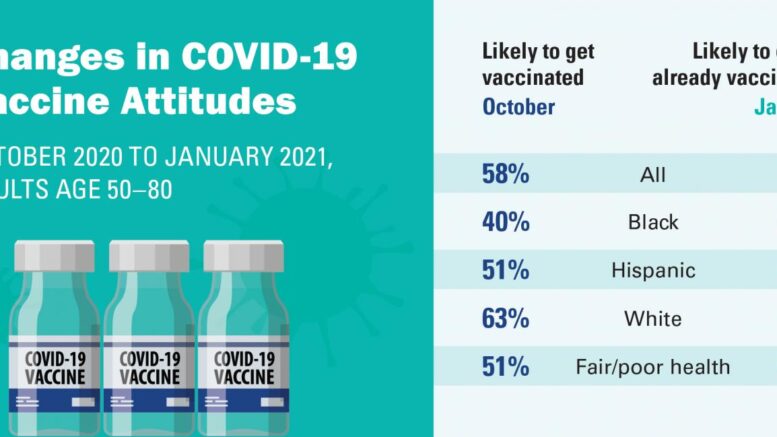 Changes in COVID vaccination attitudes among adults age 50-80 between October 2020 and late January 2021. Courtesy of University of Michigan

Last fall, nearly half of older adults were on the fence about COVID-19 vaccination -- or at least taking a wait-and-see attitude, according to a University of Michigan poll taken at the time.

But a new follow-up poll shows that 71% of people in their 50s, 60s and 70s are now ready to get vaccinated against COVID-19 when a dose becomes available to them, or had already gotten vaccinated by the time they were polled in late January. That's up from 58% in October.

Three groups of older adults with especially high risk of severe COVID-19 -- Blacks, Hispanics and people in fair or poor health -- had even bigger jumps in vaccine receptiveness between October and late January.

The poll shows a 20-point jump in just four months in the percentage of Black respondents who said they would likely get vaccinated, and an 18-point jump for Hispanic older adults. The jump for white respondents in that time was 9 points.

People who said their health was fair or poor - likely including many with chronic conditions that can increase their risk of serious illness if they catch the coronavirus - had an 11-point jump in likelihood of getting vaccinated. However, they were still less likely to want to get vaccinated than those in better health.

By late January, 60% of Black respondents, 69% of Hispanic respondents, and 62% of those in fair or poor health said they were very likely or somewhat likely to get vaccinated, or had already gotten at least one dose. Among all white respondents regardless of health status, it was 72%.

The data come from the National Poll on Healthy Aging, based at U-M's Institute for Healthcare Policy and Innovation with support from AARP and Michigan Medicine, U-M's academic medical center. In November 2020, the poll published a full report based on data from a poll conducted in October. The new data come from a question asked in late January and are being issued as an update to the previous poll.

"This is incredibly encouraging, given the amount of hesitancy we saw in our poll from late fall," says Preeti Malani, MD, the poll's director and a professor of infectious diseases at U-M. "But these new data still reveal gaps in attitudes about COVID-19 vaccination between racial and ethnic groups. We hope this new knowledge will help the various groups doing education and outreach tailor their approach so they can address questions, concerns and reasons for vaccine hesitancy."

In both outings, the poll asked older adults the question, "Assuming no cost to you, when a COVID vaccine is available, how likely are you to get it?" Respondents in January had the additional option to answer that they had already been vaccinated.

The percentage of all respondents who were most enthusiastic about vaccination - those who said they were 'very likely' to get the vaccine - jumped 20 percentage points, from 33% in October to 53% in January.

As states like Michigan open up vaccination eligibility to people over 50, the poll reveals that this group may need a bit more persuading than those 65 and up. The younger half of the poll group had an 11-point rise in likelihood of vaccination, compared with 14-point rise in the older group.

As in October, the new poll shows that individuals who have higher household incomes or more education were also more likely to report they would get a COVID vaccine.

The National Poll on Healthy Aging results are based on responses from a nationally representative sample of adults aged 50 to 80 who answered a wide range of questions online; the October poll included 1,553 respondents, and the January one included 2,022 respondents. Questions were written, and data interpreted and compiled, by the IHPI team. Laptops and Internet access were provided to poll respondents who did not already have them.

A full report of the findings and methodology of the October report is available at http://www.healthyagingpoll.org, along with past National Poll on Healthy Aging reports.