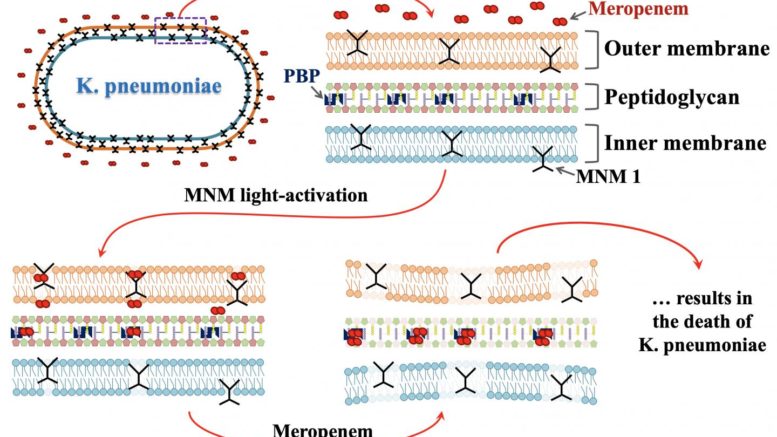 An illustration shows how motorized nanomachines triggered by light drill into bacteria, making a path for antibiotics. Experiments showed the bacteria became susceptible again to the antibiotic meropenem, to which it had developed resistance. Courtesy of Don Thushara Galbadage/Biola University

Molecular drills have gained the ability to target and destroy deadly bacteria that have evolved resistance to nearly all antibiotics. In some cases, the drills make the antibiotics effective once again.

"These superbugs could kill 10 million people a year by 2050, way overtaking cancer," Tour said. "These are nightmare bacteria; they don't respond to anything."

The motors target the bacteria and, once activated with light, burrow through their exteriors.

While bacteria can evolve to resist antibiotics by locking the antibiotics out, the bacteria have no defense against molecular drills. Antibiotics able to get through openings made by the drills are once again lethal to the bacteria.

The researchers reported their results in the American Chemical Society journal ACS Nano.

Tour and Robert Pal, a Royal Society University Research Fellow at Durham and co-author of the new paper, introduced the molecular drills for boring through cells in 2017. The drills are paddlelike molecules that can be prompted to spin at 3 million rotations per second when activated with light.

"Bacteria don't just have a lipid bilayer," Tour said. "They have two bilayers and proteins with sugars that interlink them, so things don't normally get through these very robust cell walls. That's why these bacteria are so hard to kill. But they have no way to defend against a machine like these molecular drills, since this is a mechanical action and not a chemical effect."

The motors also increased the susceptibility of K. pneumonia to meropenem, an antibacterial drug to which the bacteria had developed resistance. "Sometimes, when the bacteria figures out a drug, it doesn't let it in," Tour said. "Other times, bacteria defeat the drug by letting it in and deactivating it."

He said meropenem is an example of the former. "Now we can get it through the cell wall," Tour said. "This can breathe new life into ineffective antibiotics by using them in combination with the molecular drills."

Gunasekera said bacterial colonies targeted with a small concentration of nanomachines alone killed up to 17% of cells, but that increased to 65% with the addition of meropenem. After further balancing motors and the antibiotic, the researchers were able to kill 94% of the pneumonia-causing pathogen.

Tour said the nanomachines may see their most immediate impact in treating skin, wound, catheter or implant infections caused by bacteria -- like staphylococcus aureus MRSA, klebsiella or pseudomonas -- and intestinal infections. "On the skin, in the lungs or in the GI tract, wherever we can introduce a light source, we can attack these bacteria," he said. "Or one could have the blood flow through a light-containing external box and then back into the body to kill blood-borne bacteria."

"We are very much interested in treating wound and implant infections initially," Cirillo said. "But we have ways to deliver these wavelengths of light to lung infections that cause numerous mortalities from pneumonia, cystic fibrosis and tuberculosis, so we will also be developing respiratory infection treatments."

Gunasekera noted bladder-borne bacteria that cause urinary tract infections may also be targeted.

The paper is one of two published by the Tour lab this week that advance the ability of microscopic nanomachines to treat disease. In the other, which appears in ACS Applied Materials Interfaces, researchers at Rice and the University of Texas MD Anderson Cancer Center targeted and attacked lab samples of pancreatic cancer cells with machines that respond to visible rather than the previously used ultraviolet light. "This is another big advance, since visible light will not cause as much damage to the surrounding cells," Tour said.

Former Texas A&M postdoctoral fellow Don Thushara Galbadage, now an associate professor of public health at Biola, is lead author of the bacteria paper. Co-authors are postdoctoral researcher Dongdong Liu and research scientist Lawrence Alemany of Rice. Tour is the T.T. and W.F. Chao Chair in Chemistry as well as a professor of computer science and of materials science and nanoengineering at Rice. Cirillo is a Regents' Professor and director of Texas A&M's Center for Airborne Pathogen Research and Tuberculosis Imaging. Gunasekera is associate dean of academic and research affairs of the School of Science, Technology and Health and professor of biological sciences and biochemistry at Biola.

The research was supported by the Discovery Institute, the Welch Foundation, the National Institutes of Health, the U.K.'s Biotechnology and Biological Sciences Research Council and the Royal Society University Research Fellowship.