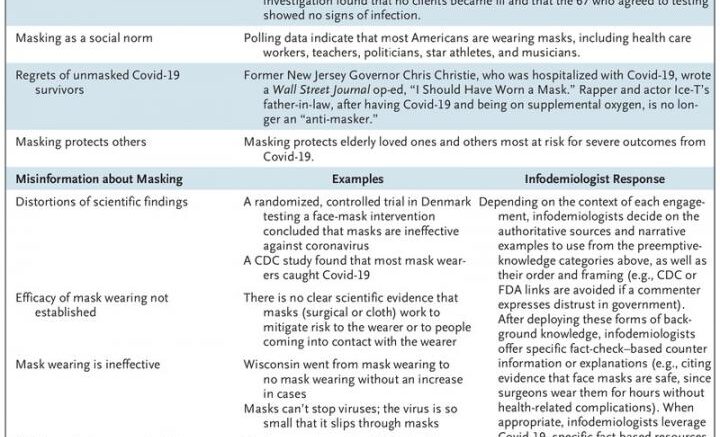 Examples from a taxonomy of misinformation about masks, with preemptive infodemiologist responses. Developed by the Annenberg Public Policy Center of the University of Pennsylvania. Courtesy of New England Journal of Medicine

Writing in the New England Journal of Medicine, a trio of science communication researchers proposes to treat the Covid-19 misinformation "infodemic" with the same methods used to halt epidemics.

"We believe the intertwining spreads of the virus and of misinformation and disinformation require an approach to counteracting deceptions and misconceptions that parallels epidemiologic models by focusing on three elements: real-time surveillance, accurate diagnosis, and rapid response," the authors write in a Perspective article.

"The word 'communicable' comes from the Latin communicare, to share, to make common," said David Scales, MD, PhD, of Weill Cornell Medical College and chief medical officer of the science-promoting nonprofit organization Critica. "What are the similarities between all the information shared on social media and communicable diseases? It's a helpful analogy in thinking through both of them."

Scales co-authored the article with Jack Gorman, MD, president and chair of Critica, and Kathleen Hall Jamieson, PhD, director of the Annenberg Public Policy Center (APPC) of the University of Pennsylvania.

The publication comes as APPC has released national survey data finding that while some 75% of the American public views the approved Covid-19 vaccines as effective and safer than getting Covid-19, about 15% is not sure whether this is true and 10% to 12% thinks this is false.

In their article, the authors recommend a series of steps to "halt such misinformation cascades":

Surveillance. Since "an overwhelming amount of misinformation and disinformation circulates on social media," sensitive surveillance systems need to be triggered before information goes viral. Companies such as Facebook should provide researchers with de-identified data on the spread of misinformation. "Lack of access to such data is the equivalent of a near-complete blackout of epidemiologic data from disease epicenters," the researchers said. If one were to conduct syndromic disease surveillance using Google, Scales said, "you could see if doctors are searching for Tamiflu, which would be highly correlated with a flu outbreak. You don't have to wait for CDC influenza data but can search for things that are correlated with the disease that show up sooner."

Diagnosis. "Just as scientists need to be able to distinguish one disease from another, infodemiologists need to distinguish different types of misinformation," said Jamieson, APPC's director. The Annenberg Public Policy Center has introduced a taxonomy featured in the NEJM article of categories of mis- and disinformation related to Covid-19 and vaccination. The part of the taxonomy regarding masking, for example, covers five types of misinformation: distortions of scientific findings; assertions that masks' effectiveness has not been proven; claims that masks are ineffective; suggestions that masks increase health risks; and conspiracy theories about masks. "Knowing the type of misinformation that is circulating allows us to develop strategies for buffering audiences from deceptions or misconceptions and, when necessary, to deploy a rapid-response system to rebut and displace inaccurate claims before they take hold," the authors wrote.

Response. Rapid epidemiological response consists of containment and treatment by medical personnel. So-called infodemiologists, modeled after the CDC's Epidemic Intelligence Service officers, can counteract misinformation in traditional media sources and online, the researchers say. Just as few people were trained in CPR a few decades ago but many are today, Scales said many people could be trained in evidence-based ways to counter misinformation. "The goal is to have people ready and trained so they can spring into action when a communication emergency comes up," he said. Critica, a nonprofit organization seeking to center the role of science in making rational health decisions, is among numerous organizations, such as New York State's Citizen Public Health Training Program, training infodemiologists to do this work. Critica's focus is not on those who are staunchly opposed to the vaccines but those who are susceptible to misinformation and vaccine-hesitant.

A national probability APPC survey released this week of 1,941 people finds that 74% of the U.S. public says that the authorized Covid-19 vaccines are effective and 75% says the vaccines are safer than getting Covid-19. About 15% is unsure whether these statements are true, a potentially persuadable group that is larger than those deniers who incorrectly say that the statements are false. Read the survey.

Identifying the various kinds of mistaken beliefs is critical to halting their proliferation.

"To make it possible to effectively interdict viral deception we not only need reliable means of finding it but also the wherewithal to predict when, where, and how it will spread," Jamieson noted. "Just as scientists need to be able to distinguish one disease from another, infodemiologists need to distinguish different types of misinformation."

In the NEJM article, the authors argue for a broad approach to combat misinformation.

"Our model will be more effective for people intrigued by misinformation but not yet under its thrall than for committed acolytes sequestered in echo chambers. But the model's strength, like that of epidemiology, is in recognizing that effective prevention and response requires mutually reinforcing interventions at all levels of society, including enhancing social-media algorithmic transparency, bolstering community-level norms, and establishing incentives for healthier media diets."

1 Comment on "Treating the COVID-19 ‘Infodemic’ as an Epidemic"