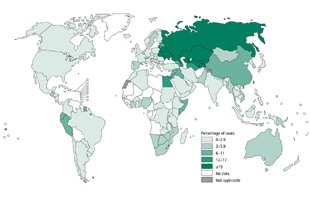 123 countries have XDR-TB cases. Map courtesy of WHO

A study published today in PNAS (Proceedings of the National Academy of Sciences) examines the evolutionary and epidemiologic history of an epidemic strain of extensively drug-resistant tuberculosis (XDR-TB) -- called LAM4/KZN -- in KwaZulu-Natal, South Africa. This strain was first reported in a 2005 outbreak in Tugela Ferry, KwaZulu-Natal, where it was associated with 90 percent mortality among predominantly HIV infected individuals, and has since become widespread throughout the province. A new study identifies key host, pathogen and environmental factors that facilitated the success of this XDR-TB strain and steps that can be taken for early identification and containment of future epidemics.

The study, led by Columbia University, with a multi-institutional team of researchers from South Africa, the United States, and Norway, used genomic, spatial and protein modeling to answer when and where this strain emerged, and how and why it became widespread. The study utilized data and TB strains collected in the prospective XDR-TB transmission study (TRAX) from 2011-2014 led by Emory University, the University of KwaZulu-Natal, and the Centers for Disease Control and Prevention.

Researchers localized the geographic origin of the strain to a rural district, bordering Mozambique and eSwatini, with high preexisting rates of drug-resistant TB located 400 hundred kilometers away from where the first outbreak of LAM4/KZN was reported. Results also indicate that the strain emerged in the early 1990s, acquiring key advantageous mutations prior to undergoing marked expansion concurrent with the onset of the generalized HIV epidemic. In addition, the study suggests cyclical rural-urban migration in the rapid and widespread dissemination of this strain.

"Our results indicate that this strain of XDR-TB emerged approximately 12 years before it was identified by public health activities," said lead researcher Barun Mathema, PhD, assistant professor of epidemiology at Columbia University Mailman School of Public Health. "Our research highlights multiple environmental and pathogen-specific factors must align in order for these pathogens to establish sustained transmission and disperse into geographically separated populations. These processes take place in the so-called 'pre-detection' period, years before the pathogens are first noticed as public health threats," said Mathema.

"From our findings, we learned the importance of HIV coinfection, high preexisting rates of drug-resistant TB, human migration, and adaptive evolution in the emergence and dispersal of this critical public health threat," noted first author Tyler S. Brown, MD, research fellow in the Infectious Diseases Division at Massachusetts General Hosptial.

"Routine integration of whole-genome sequencing into public health surveillance can address any knowledge gaps and enable us to better understand the pre-detection period and inform strategies for early identification and local containment of AMR pathogens," observed Mathema. "Surveillance, enabled by the rapidly decreasing cost of pathogen sequencing, can provide a powerful strategy for public health practitioners."

The study was supported by the National Institute of Allergy and Infectious Disease, National Institutes of Health (grants R01AI089349, R01AI087465, R01AI114304, and R01AI138646); NIH career development awards and training grants (K24AI114444, K23AI134182, T32AI007061) and grants from the Emory University Center for AIDS Research, Albert Einstein College of Medicine Center for AIDS Research, and Albert Einstein College of Medicine Institute for Clinical and Translational Research. The work was also supported by the American Museum of Natural History and the Flatiron Institute-Simons Foundation.