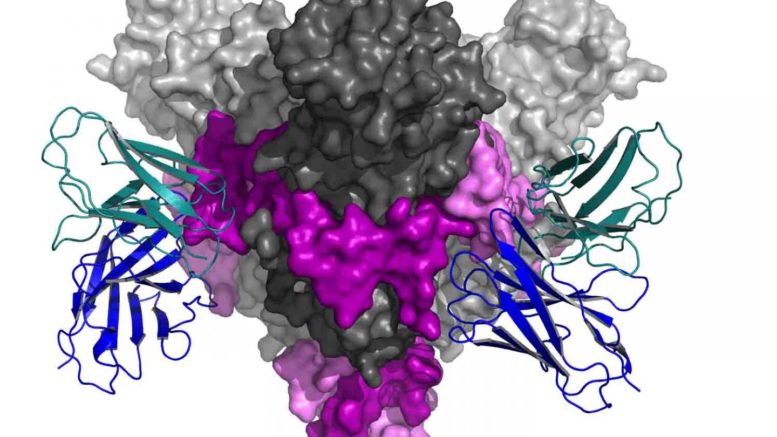 The glycoprotein spike complex of the Ebola virus bound by a neutralizing antibody isolated from a vaccinated individual. Surface representations in grey and pink show the two distinct submits that make the trimeric Ebola spike complex. The heavy and light chains of the neutralizing antibody are shown as blue and green ribbons, respectively. The antibody neutralizes this complex by stapling two adjacent subunits and preventing conformational changes needed by the virus to enter the host cell. Courtesy of Weizmann Institute of Science

In the recurring, deadly Ebola outbreaks in parts of Africa, today's health workers now have at least some tools to fight the disease: vaccines. Vaccines against Ebola have been administered to over 100,000 people to date, but they are barely out of the experimental stage. It is not known how well these vaccines will provide long-term protection across a broad population. Furthermore, on the basic scientific level, the effect of vaccination on the immune system and how the immune response of vaccinated individuals compares with that of individuals who have survived Ebola infections was not known.

A Weizmann Institute of Science lab recently joined forces with a research team in Cologne, Germany, to uncover the details of the molecular response that occurs in the immune system after vaccination against Ebola. Their findings may help health organizations devise better strategies for containing and preventing the disease.

Dr. Ron Diskin of the Institute's Structural Biology Department explains: "These vaccines -- made by recombinant methods that attach an Ebola protein to a harmless virus -- are hard to produce, and thus there is not enough of them to vaccinate an entire population. In addition, the civil strife in some areas where Ebola is rampant today, the facts that it is often needed in villages that are hard to reach and that because of its scarcity, the vaccine tends to be given only to those most closely connected to individuals who are already sick. Understanding exactly how the immune response is produced following vaccination will not only help refine the vaccine, itself, it can help us understand whether it will work against different strains of the virus or whether the dose given today is the best one."

The study began in Germany, in the lab of Dr. Florian Klein of the University of Cologne. Klein, an immunologist, and his group looked for signs of the immune response in blood samples from six people who had received the vaccine a year or more earlier. The group singled out the B cells - those that produce the antibodies that make up our "immune memory" - and conducted deep sequencing, tracing the lineages of those cells and isolating individual antibodies that bound to viral proteins.

Cells from each of the six people produced a wide number of antibodies, and Diskin and his team ? including Dr. Nadav Elad of Chemical Research Support and Dr. Hadas Cohen-Dvashi in his lab group ? decided to focus on two promising ones they believed were strongly involved in the long-term immune response.

The first step was to understand exactly how and where the antibodies bind to the viral glycoprotein (part of a virus's outer membrane) used in the vaccine, and just how this binding neutralizes the virus so effectively. To do so, the team was able to use a new piece of equipment: a top-of-the-line, high-powered electron microscope. In fact, this study was the first conducted with the new microscope, recently installed in the Institute's Electron Microscopy Unit. Advances in the preparation, detection, automation and computational analysis (some of which garnered their developers a Nobel Prize in 2017) have made this latest version of the electron microscope able to reveal the three-dimensional structure, practically down to the last atom, of an antibody bound to its target on the glycoprotein. "Until recently, the work of structural biology involved painstaking crystallization and X-ray diffraction - a process that could take at least half-a-year to a year," says Elad. "We can now skip the crystallization altogether, and the entire process ? including extremely involved computational analysis ? is completed within a couple of weeks."

Although many of the antibodies produced by the B cells bound to the glycoproteins - some apparently more effectively than others - the research group was able to show why the two antibodies characterized by Diskin and his group were very efficient at stopping the virus. These bound to two sites on the viral glycoprotein known for their vulnerability, but they bound in a different way than other antibodies that had been studied.

Diskin and the group were able to distinguish the exact make-up of these antibodies - the way that one so-called "heavy chain" combined with another "light chain" - and to map the precise points at which these attached to the viral protein. "In fact," says Diskin, "the antibodies we studied are much more effective at binding than those that are being tested today to treat Ebola." Comparing the map of binding sites to those studied in Ebola survivors, which are known to be protective, showed a nearly identical pattern. Further research in the German lab as well as others tested the antibodies against the Ebola protein ? even against the live virus ? and these confirmed that the part of the immune response that was created by the vaccine and which was studied by the group is indeed effective, ultimately explaining the mechanism of protection.

Although there is still too little information to enable us to tell whether the vaccine can produce an immune response against other Ebola virus species, the study suggested that the antibodies did work against multiple isolates of a single species, and Diskin hopes that further research will show whether, as they hope, a single vaccine can fight the disease across the continent.

Diskin and the German research team intend to continue this research. Based on an additional surprising observation from this study, that a particular group of effective antibodies sharing the same heavy-and-light-chain germline combination was elicited robustly in all the vaccinated individuals, they want to know precisely why and how these particular antibodies are produced, and how they manage to work so effectively against the virus. They also want to understand whether there are any serious limiting factors that could prevent the antibodies produced following this specific vaccination from targeting all the Ebolavirus species, or if the breadth of this response might possibly be expanded by improving the vaccines.

Diskin's research is supported by the Moross Integrated Cancer Center; the Dr. Barry Sherman Institute for Medicinal Chemistry; the Jeanne and Joseph Nissim Center for Life Sciences Research; and the estate of Emile Mimran.

Be the first to comment on "Ebola Antibodies at Work"